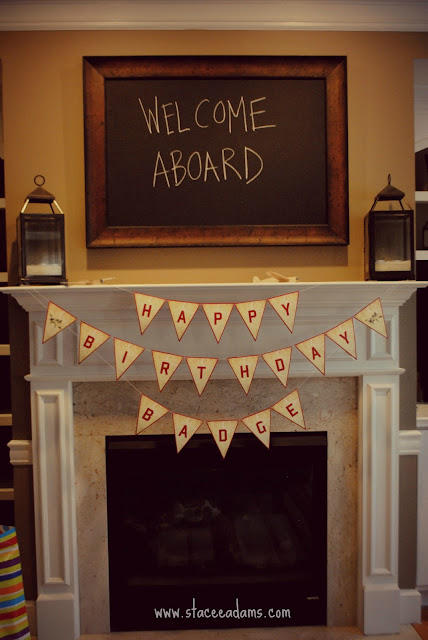 Badge had his FIRST birthday yesterday! I loved celebrating his special day with an airplane themed birthday party. 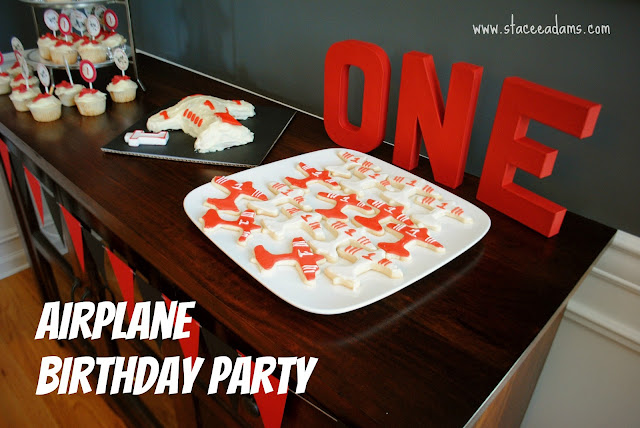 Here is the Birthday boy!! 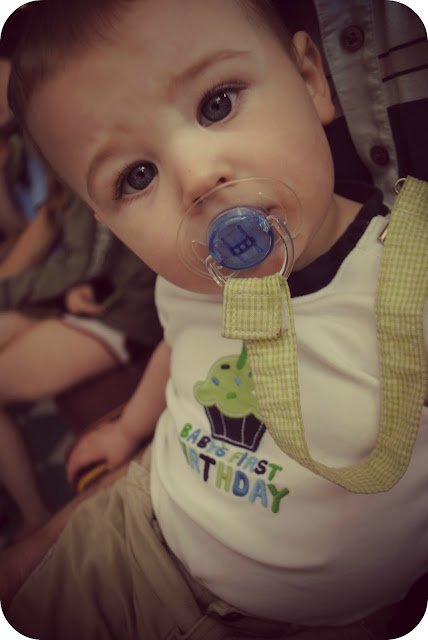 We took him out to one of our favorite Atlanta restaurants for lunch. 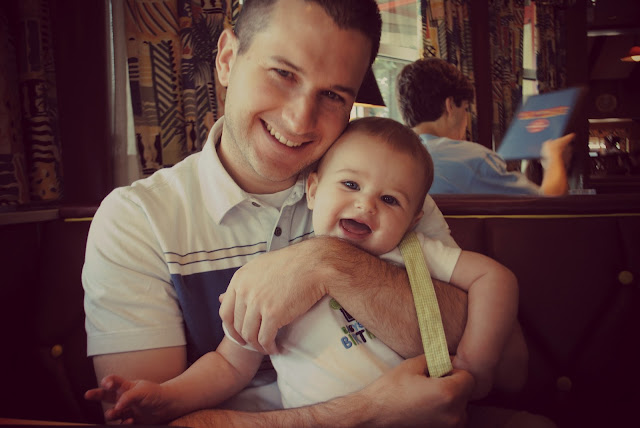 Of course, he ordered the mac and cheese. :) 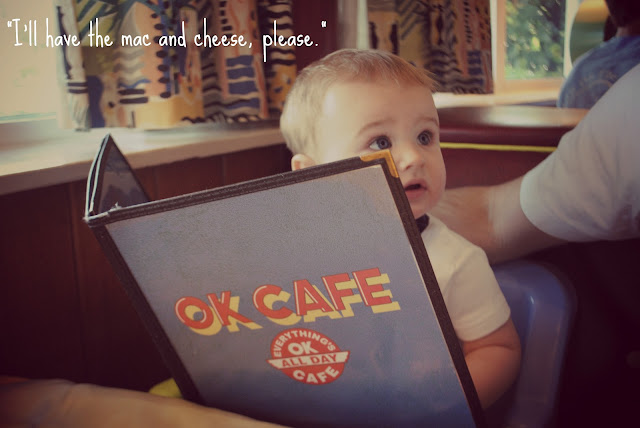 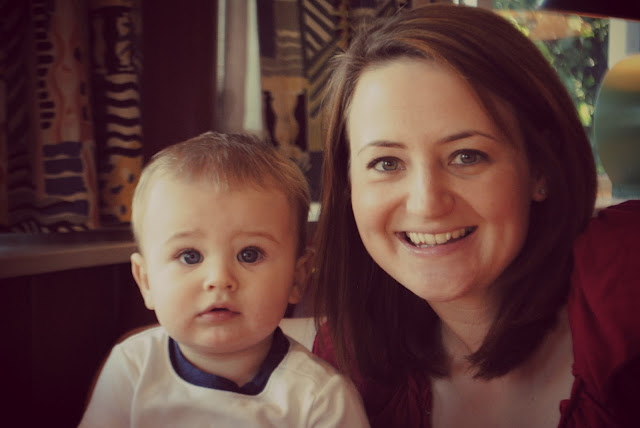 And then we headed back home so Badge could nap and we could make the final preparations for his party! 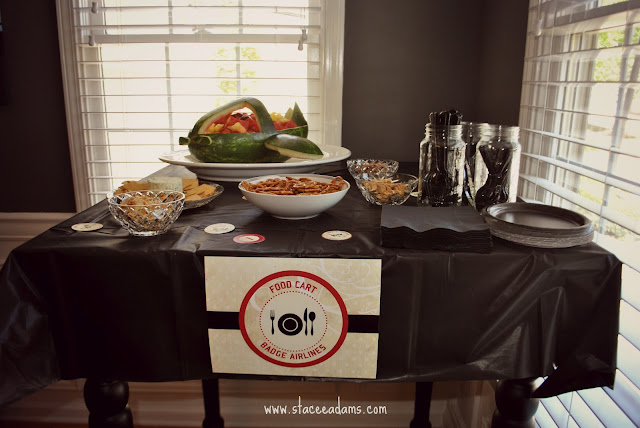 The Food Cart complete with an airplane watermelon. For food- I stuck with the airplane theme (of course) and served pretzels, peanuts, cheese and fruit. 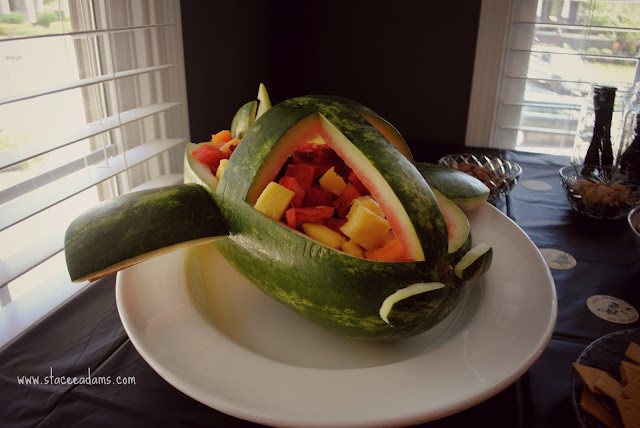 The Dessert Table was my favorite.

I bought a tiny airplane mold at the Cake Art Store and filled it with melted white chocolate chips with red coloring. I used these for the cup cake toppers along with the printables that I bought from Flipawoo. 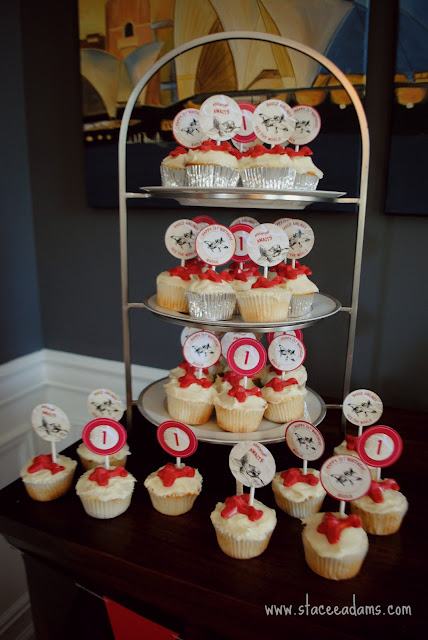 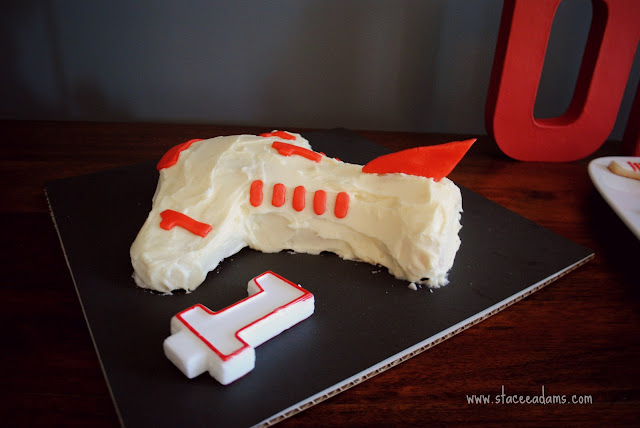 I used an airplane cake mold and made marshmallow fondant (this recipe). I looked into buying pre-made fondant but it was just too expensive and it doesn't taste that great. I was really pleased with the marshmallow fondant, it was super easy to make. I couldn't believe how easy it was! And it is yum-o too! 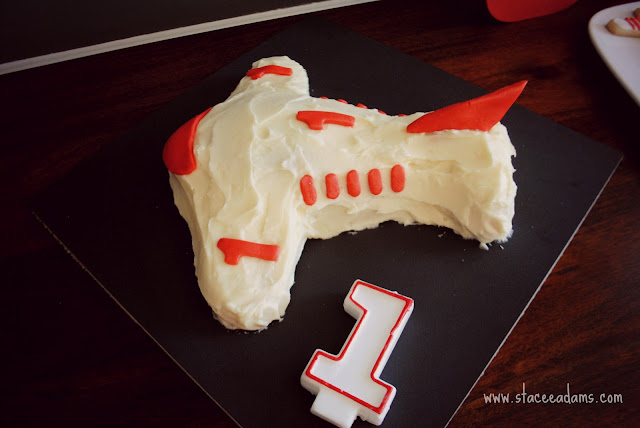 I picked up cardboard letters from Joann's and painted the red to spell out 'ONE'. I think I'll put it up in his room for the next year.
I was planning to give away the airplane cookies as favors, but they kept breaking every time I tried to bag them, so I decided to go a different route with the favors. For the cookies, I followed every word of Sweetopia's tutorials and they turned out beautiful and delicious!! This was my first time piping and I loved it! I think I would enjoy taking a cake decorating class some day in the future! 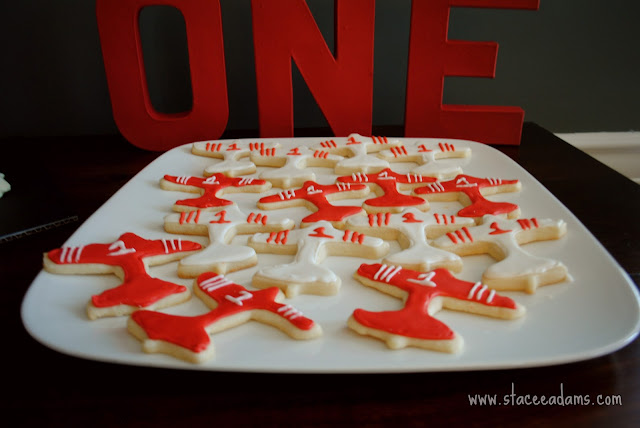 I got balsa wood airplanes from here. The kids enjoyed putting them together and then seeing who could throw them the furthest in the back yard. The planes were a huge hit, and they got to take them home! 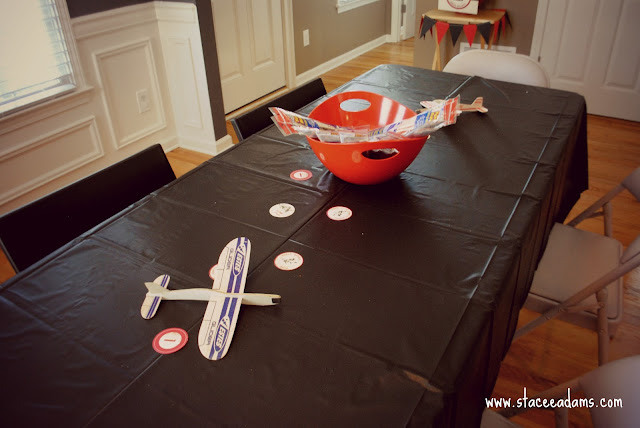 Here is the baggage claim- where you claimed your favor. 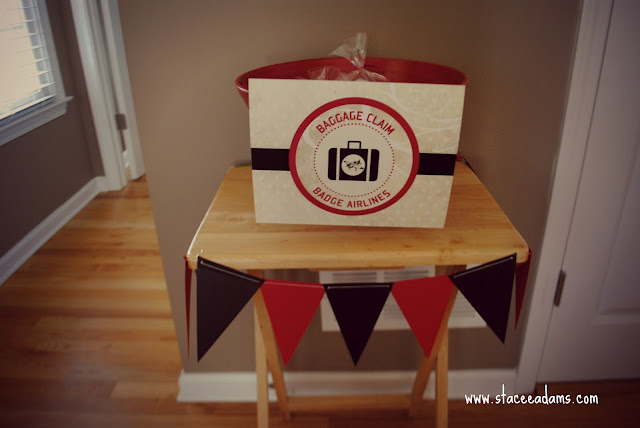 After searching all around for a tiny bag of peanuts and not finding it, I decided to just go with peanut M&M's (close enough to peanuts right?) and also a bag of Biscoff cookies that you get on Delta flights. Love those! 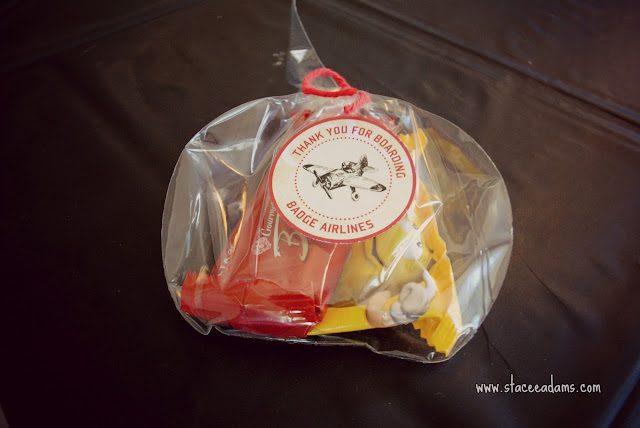 One of my favorite decorations at the party were the airplanes flying around on balloons. They were all over the house and the kids (and adults) enjoyed them passing by. I was inspired by this photo on pinterest. For the airplanes, I bought red and white cardstock, drew the planes by looking at pictures online and then glued them together. The cardstock was only printed on one side, so I had to cut out two of every piece and then glue those pieces wrong sides together. I got white balloons so they would be floating by on a white cloud. 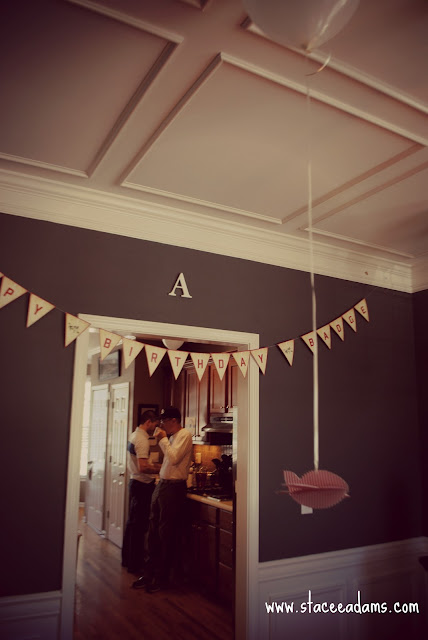 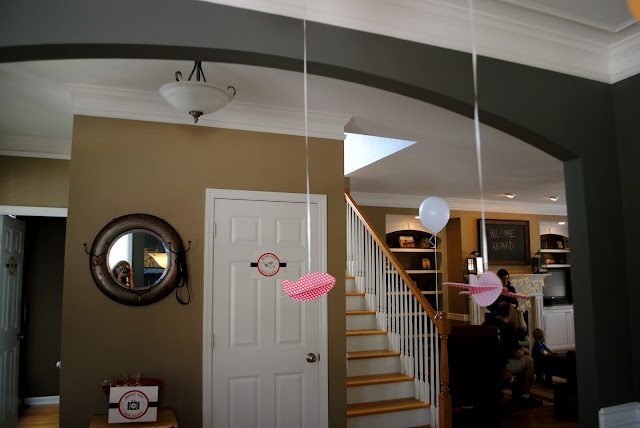 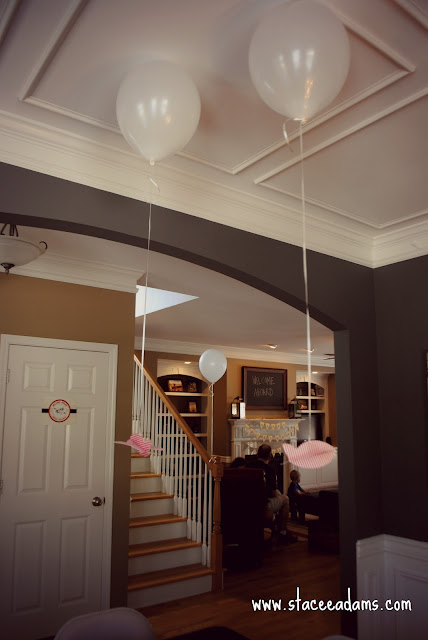 This is Badge while we were singing to him- I think he was a little freaked out by everyone! 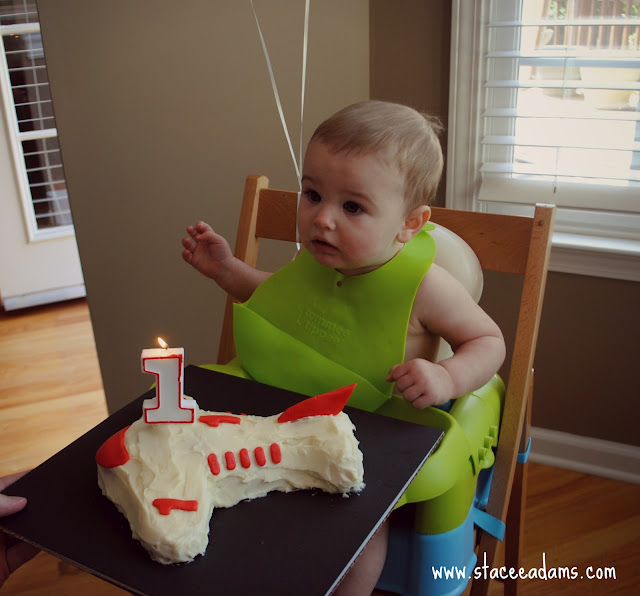 He only put in one finger at a time at first. Eventually, we just broke off the wings and gave that to him. He was a very polite eater, hardly made a mess at all! 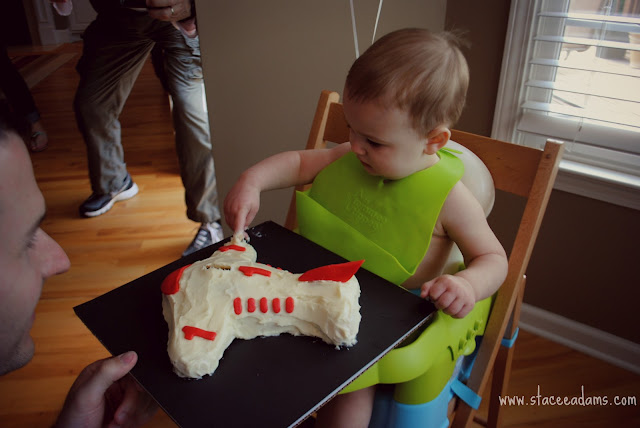 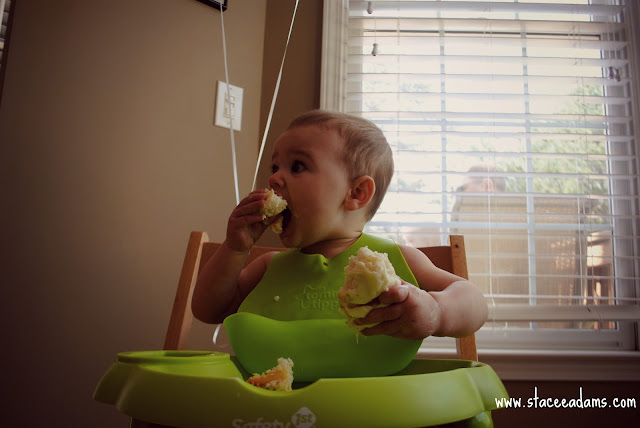 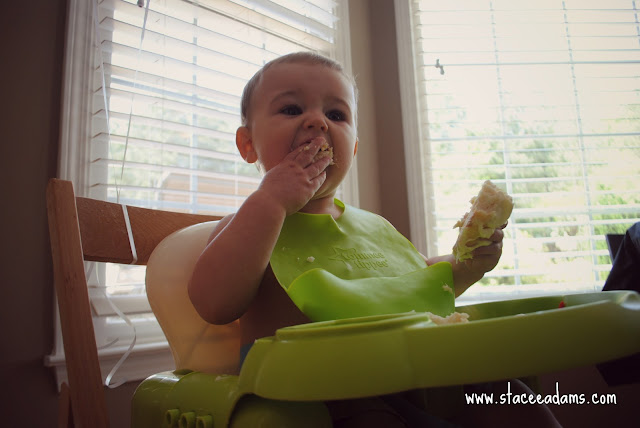 Badge was gifted some amazing presents! He received so many awesome books and toys! Thank you sweet friends and family! 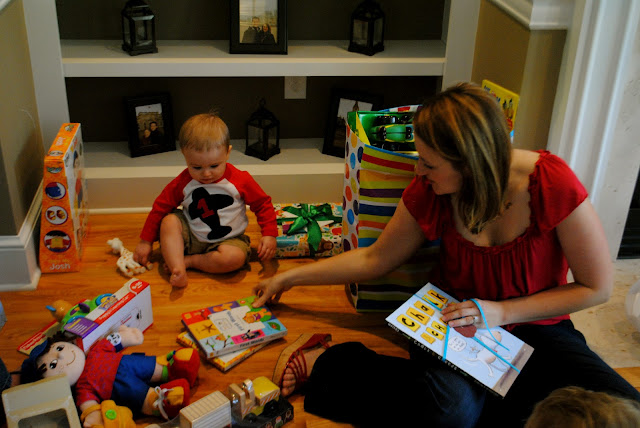 I don't think he knew what to play with first! 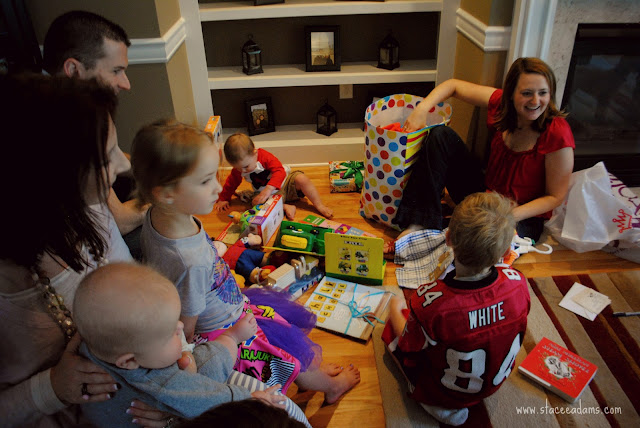 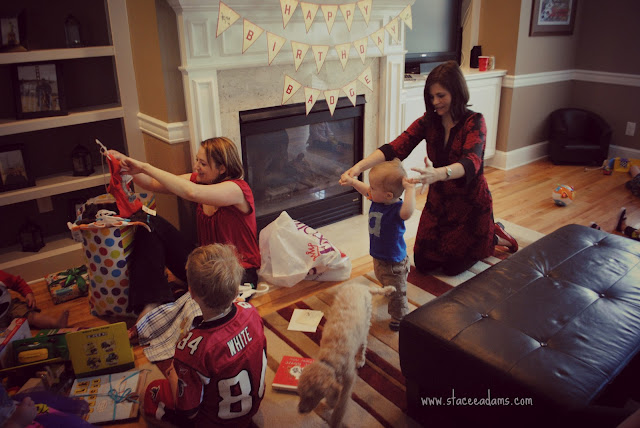 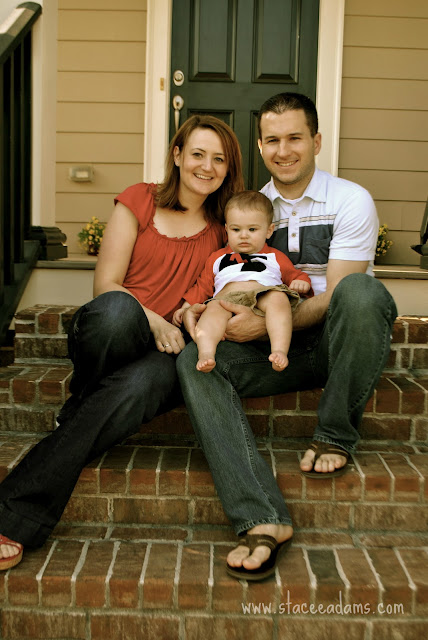 And yes, I also made his airplane shirt! I ordered the tshirt from here in the smallest size, 2T and then drew the applique for his shirt and sewed it on! 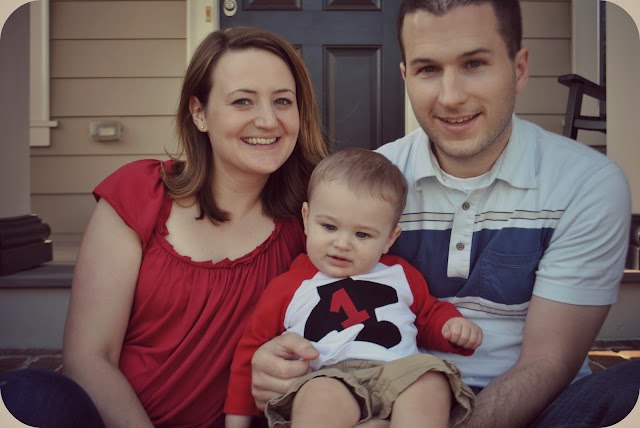 Happy First Birthday Badge!! We love you and can't wait to see all the fun changes that will come this year!